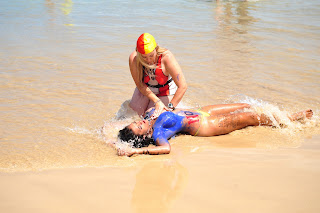 World renowned Australian bodyartist and up and coming photo journalist, Eva Rinaldi, returned to her old news media stopping ground, Bondi Beach today, and we think was responsible for once again raising the temperatures of guys and gals.
On previous occasions whenever Ms Rinaldi visited Bondi Beach either a bodypainted look-a-like of Oprah Winfrey or 'Rebel Avatar's' would appear.
Well, today was a bit of mystery.  There were a number of reported sightings of an artist matching Ms Rinadi's ID, friend - TV presenter Joy Hhuby and photographer Marek Jezierski.
Before you could say "Let's Paint Oprah" a couple of bodypaited Aussie stunners appeared out of the middle of nowhere, between the flags on the north end. The brunette lying on her back, appearing to be exhausted, but showing an inkling of a smile, and just a touch of pink, with much of her eco friendly bodypaint having been washed away. The blonde bombshell frantically pumping (her heart) and pounding on her chest, attempting to give the kiss of life, right between the lips. A concerned onlooker shouted "we better get help" and rushed over to the scene pulling out his mobile and looking to dial 000. A few more minutes and the victim had fully recovered. Then a light applause, and many a tourist, mainly red blooded males, asked if they would be ok to get a photo, and the rescuer and rescue-ee both obliged, seamlessly making a miraculous recovery.
One beach goer couldn't resist and asked the models their names and we understand them to now be identified as Kalais Rauchle and Tess Evans.
So, an emergency, elaborate stunt or life imitating art? For the record no Bondi Rescue lifeguards or Network Ten press types were present, so we suspect it may have been another 'Human Statue' creation.
It was 28% at Bondi Beach, Sydney today, but the buzz is Ms Rinaldi's antics raised the bar o meter at least another 10%. Bondi Beach continues to play a game of "can you top that", and the bodypainting queen of down under looks to be giving all and sundry a bit of a run for their money. We rate the performance (if that is what it was) as a Perfect 10. Yeah, Brooke Shields and Andy Warhol would have been proud. 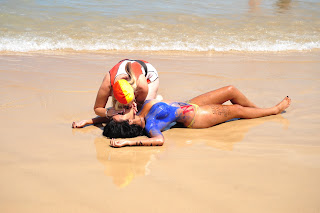 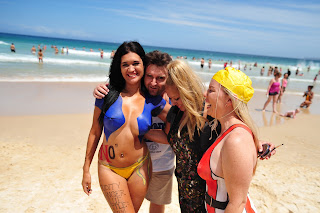 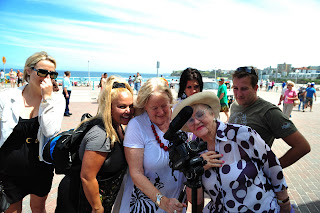 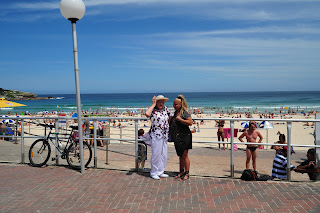