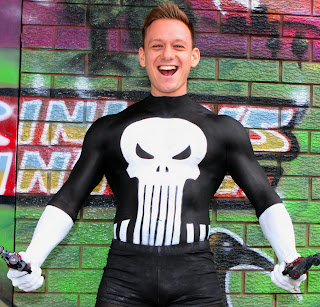 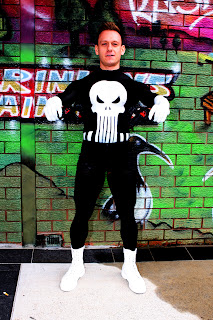 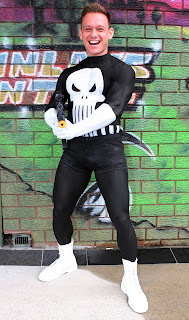 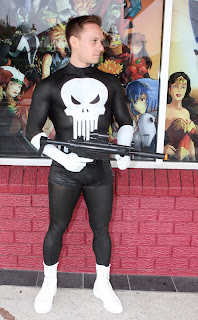 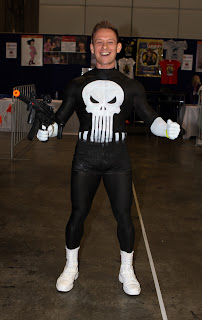 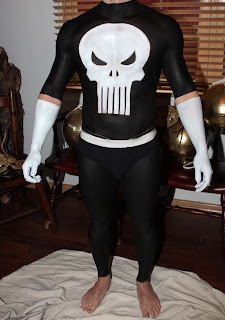 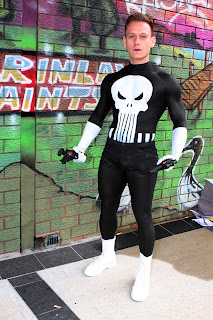 Superhero fans out there... today Sydney, Australia got its first dose of Supanova - Superhero and pop culture mania again for 2013.

Superheroes remained a popular theme at the famous expo that tours most capital cities of Australia, including Melbourne, Perth, Brisbane, Adelaide and the Gold Coast.

Fanboys and fangirls have been dressing up as their favourite characters for as long as we can remember, and this year the competition continued to heat up, as creative arts and bodypainting / bodyart agency, Human Statue Bodyart created some superhero creative works for Supanova, with photographic evidence surfacing that demonstrates the agency created at least one 'The Punisher' (of the the darker superhero characters from Marvel Comics aka Marvel Entertainment).

Marvel Comics / Marvel Entertainment superheroes appear to be a bit more popular than the DC Comics / Warner Bros. characters this year. Neither Marvel or DC / Warner Bros. are official sponsors or advertisers at the popular pop culture expo, but that doesn't seem to have effected the exposure they receive.

Speaking of exposure, it was great to see the guys and girls from AWF (Australasian Wrestling Federation at Supanova again this year. These guys sure know their pro wrestling and they appeared to attract a crowd of between 400-500. AWF promoter, Greg "TNT" Bownds is doing a top job, and has been in the business for over 14 years now, which is like a lifetime in pro wrestling circles.

Take time to dress your best, as we understand lots of news media will be attending with photographers and video cameras, so if you look great there's a decent chance you will make the news in some fashion!

If you didn't make it today - a wet Saturday by anyones standards, don't worry - you can still attend tomorrow.

Not content with delivering our biggest-ever guest line-up to Melbourne and the Gold Coast, we've announced our initial Sydney and Perth cast, too!

This is our first round of guests announced for the Sydney and Perth expos with many more to come!

Guests participating in this year's Supanova include:

Also featuring at this year's festival will be The Australian Timezone Supanova Pinball Championship. The light-hearted nature of the competition facilitates a new dimension of social interaction and the physicality of the game is what sets pinball apart. The championship has three stages including local tournaments, state finals and the national grand final, set to be held at the Brisbane Supanova from November 8 to 10. The winner will receive The Avengers Pro pinball machine.