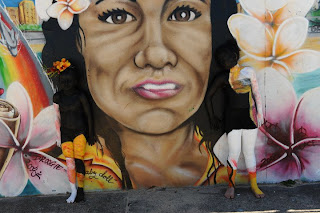 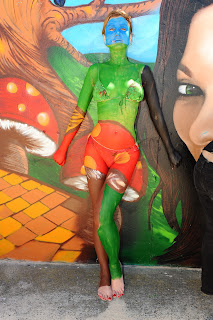 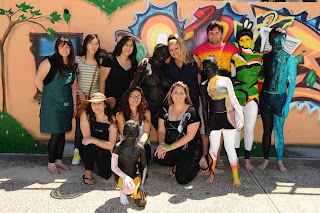 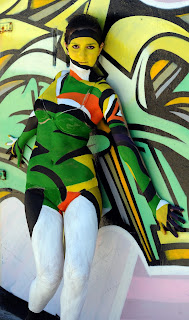 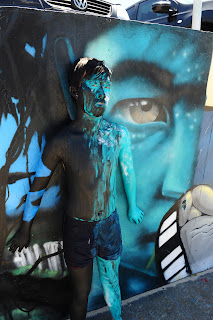 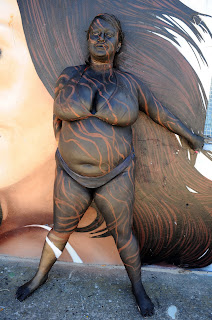 It was another glorious day at Bondi Beach as summer continues to sneak up on us.

The beach was abuzz today with clear blue skies, 22 degree temperatures, awesome surf, surf comps for pros and the nippers and much more.

As the day moved forward a special vibe swept through the iconic beach. Before long, beach walkers and cafes were chatting about the fact that today was the Bali day of remembrance and that this would also be included in surfing and artistic endeavors.

At roughly 10am a now familiar site, the 'Let's Paint Oprah' artists and models, were seen getting creative with their bodypaint workshops up against the famous graffiti art wall which runs between the Bondi life guard towers and the skatepark. One hour later six eclectic models had been bodypainted, and Bondi's resident photographer and noted philanthropist, Peter Carrette, was quick to snap up the action, so Team Human Statue can wire and Facebook the images around the world.

Eva Rinaldi and her human rainbow clan has taken to Bondi Beach like a ducks to water, and Eva has clearly established herself as Bondi's newest and most creative local force.

The themes were partly inspired by the Bondi Beach graffiti art wall and were entitled 'Breaking Down The Wall To Painting Oprah'.

To date Eva's campaign to paint or do a human statue of Oprah Winfrey have included 'Let's Paint Oprah', 'Dear Oprah', and 'My Want Today Is To Paint Oprah Winfrey' (via Sydney radio), and next up will be 'Walk To Oprah', which will involve a gathering of bodypainted models and iconic Australians walking for a good cause from Circular Quay to the Sydney Opera House in the coming weeks.

As a number of beachgoers said earlier, the mere fact that Human Statue Bodyart did get a return phone call from Oprah's Harpro Productions is evidence that they're on the right track. A large number of people walking past Eva's creations were overheard to say words to the effect of "I know what that is. That's the lady who wants to bodypaint Oprah".

All we can say is keep doing what you're doing, may the world be your human rainbow, and be blessed in your quest to collaborate with Oprah and friends. 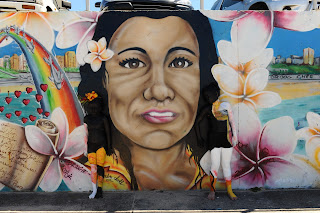 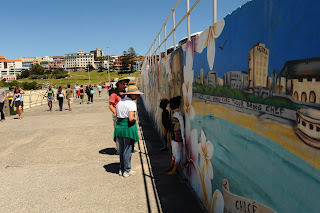